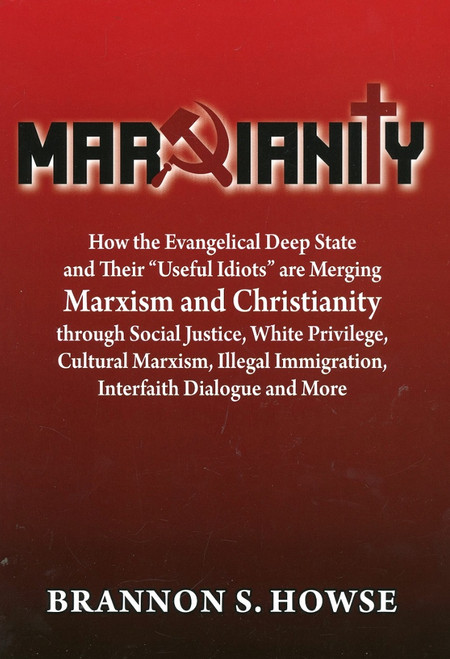 Now in its THIRD printing. 336 pages. Normally $19.99 but now only $4.99 plus S&H because Brannon believes America, and the world, is at such a crucial hour that this book needs to be read by as many people as possible. Please order quantities to give away to others. We must resist the brainwashing, fake news, propaganda and lies with the truth. This book will help Americans fight the battle raging for the hearts and minds of family and friends.

If you would like to support this project, please make a tax deductible contribution at www.wvwfoundation.com or by using our mailing address:

Also consider going to www.mypillow.com and using the promo code WVW to save up to 66% on over 110 products and a generous portion of each purchase comes back to the support the work of WVW Broadcast Network. Thank you

The Marxist playbook offers two fundamental strategies to undermine capitalism and Christianity. One strategy is to co-opt Christianity from within, corrupt it, and thus render it no longer an opponent of Marxism, but a willing participant in fulfilling the goal of the Marxists. The second strategy is to create a coalition of victims and create “offenses” in order to “prove” the oppressors of the coalition of victims are Christians and capitalists. By doing so, Christianity and capitalism can be effectively demonized as the source of all suffering and oppression. The key to this information operation is to hide Marxist ideologies under masking terms that are given credibility through the use of twisted scriptures as well as revisionist history and the elimination of truth, reason, logic, and context. They must also enlist religious useful idiots and compromised “bridgers” that aid in merging the religious left and the religious right.

By confronting these tactics, those who stand firm on the Word of God and refuse to compromise will be set up for ridicule and persecution. They’ll be labeled haters, intolerant, bigots, divisive, mean-spirited, and unloving by those outside of evangelicalism, as well as the evangelical deep state.

Acts 20 and Jude 3 warn of the men that make up the evangelical deep state. Their agenda is fueled by redefining a Biblical gospel away from individual salvation through faith and repentance to a collective salvation that calls for the “Marxians” of the world to unite to heal the wrongs and to create a “just” society that eliminates poverty and injustice and creates the kingdom of God on earth through collective salvation.

One of the original re-definers of the gospel was a man by the name of Walter Rauschenbusch, a Fabian socialist and father of the social gospel movement. He said, “The only power that can make socialism succeed, if it is to be established, is religion. It cannot work in an irreligious country.” This book will clearly reveal the growing false dominant church predicted in Revelation 17:1 as well as its strategies for taking out and discrediting its enemies. Learn how to protect yourself from the agenda of Marxianity that includes social justice, white privilege, cultural marxism, amnesty for illegal immigrants and interfaith dialogue.